Br. Ryan Holovlasky Ordination to the Order of Deacon 16 Mar 2021
Read all News » 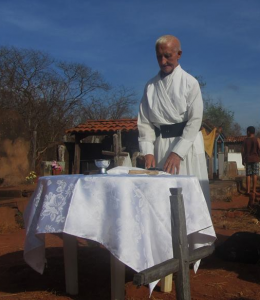 It was announced on Friday 21st August that the 2015 Hugh O’Flaherty International Humanitarian Award will be awarded to Fr Sean Myers, Irish born Redemptorist Missionary in Brazil.

The Award will be presented to Fr Sean by the Mayor of Killarney Municipal Authority on Saturday October 31st at an Award Ceremony in the Killarney Plaza Hotel.

This year marks the eight year of the Memorial to the Monsignor, organised to raise awareness of the Humanitarian work carried out by the Monsignor, when during WWII, together with his colleagues in the Rome Escape Line, he saved over 6,500 people from the clutches of the Nazis who had occupied Rome at the time.

Over the past few months nominations have been invited for people or organisations, which have displayed the same humanitarian ideals and principals of the Monsignor and would be deserving of this Award.

A shortlist of 10 Nominees was considered by the independent Award Panel, at which it was agreed that Fr Myers would receive the award for 2015. Fr Myers was nominated by the Fossa Community, the place of his birth some 85 years ago.

In the spring of 1960, the recently ordained Fr Sean and two Redemptorist Order colleagues arrived in north east Brazil and soon assumed responsibility for a parish over half the size of the island of Ireland.

His nomination stated “Much of the part of Brazil to which he was assigned in 1960 was unknown, inaccessible, ignored and neglected by the authorities. He quickly became widely known as “Padre Joao”. During his parish visits to the remote villages and homesteads in the interior, he encountered people who lived in isolation, without water, often hungry, illiterate and undocumented. He found people who lived in fear of eviction, women who worried about loss in childbirth and children who spent their days tending animals. Having no deeds or proof of ownership ensured vulnerability when faced with the notorious “land grabbers” and corrupt officials.

He identified with their sense of helplessness and hopelessness. He knew the value of education, good health and the necessity of water and road access. His humanitarian and Christian spirit told him he had no option but to help.”

Chairperson of the Hugh O’Flaherty Memorial Committee Jerry O’Grady stated “Fr Sean was selected by the Award Committee from an extensive short list of very worthy nominees, and it is indeed striking that his life history is in so many ways similar to Monsignor Hugh’s. It is incredible that at the age of 85 he continues to serve his community in Brazil and apparently has no intentions of retiring”

Because of the scale and remoteness of his parish, it has not been possible to communicate with Fr Sean on the decision to award him the 2015 Hugh O’Flaherty International Humanitarian Award, however, representatives of his family and the Fossa community expressed their delight to see him recognised in this way.

More details on the 2015 Memorial Weekend Programme as well as detailed information on the Monsignor’s life and work can be found at https://www.facebook.com/HughOFlaherty