At a ceremony of beatification in Foggia, Italy, on 18th June 2016, Cardinal Amato, delegate of Pope Francis, declared Sister Maria Celeste Crostarosa, Founder of the Redemptoristine Nuns, a Blessed of the Catholic Church.

The Cardinal began his homily at the beatification ceremony with the following quotation of an early Jesuit:

“Saints are lighthouses that light up the dark night of human life with hope.  Saints are not ‘people of sand’, lacking substance, that crumble like children’s sand castles on the shores of the sea.  Saints are strong and courageous people, who honour humanity by renewing the flavour and 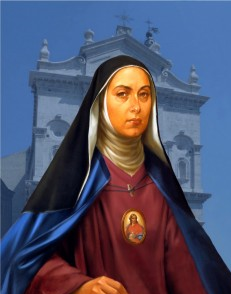 power of life every day. Created by God, Saints have the solid robustness of a humanity restored by grace.”

Living the life of a hidden and enclosed, contemplative nun, Maria Celeste is little known outside of Redemptorist communities and Redemptoristine monasteries.

Who was Bl. Maria Celeste Crostarosa?  On 31st October 1696 a baby girl was born in Naples to the Crostarosa family, the tenth of twelve children, and the following day she was baptized receiving the names Julia Marcella Santa.  Later on, when she became a nun, she received the names Maria Celeste, and as such she is known to posterity.

She was idolized by her siblings for being a lively youngster, vivacious, sensitive, and of good intellect.  By the age of five or six, Julia began to experience an unusual sense of intimacy with Jesus, ‘…knowledge of His divinity in such a sweet way that she conceived the idea of loving and serving Him.’

At the age of twenty, she and her sister Ursula entered the Carmelite Convent of Marigliano (about 12 miles from Naples).  However, after only five years in religious life the monastery was unjustly suppressed because of outside interference, necessitating their departure.

While still there, Julia had met Fr. Thomas Falcoia, who was giving the community a retreat.  He suggested that it was the Will of God that she and her sisters – another younger sister had joined the two – should go to a monastery in Scala, near Amalfi, where he had reformed a community to the spirit and practice of the Visitation Congregation.

It was as a novice in Scala that Julia was named Sr. Maria Celeste and here she received a revelation and was ‘made to understand God’s plans for a new institute which the Lord would place in the world by means of her which would have for its laws and rules His very life.’

Under the direction of Fr. Falcoia and with the enlightened support of St. Alphonsus de’ Liguori, the Visitation convent was reformed according to the Rule Celeste had received from the Lord on April, 25, 1725.

In 1730 a young priest, Alphonsus de’ Liguori, had travelled to Scala for a period of recuperation having been worn out by his labours in Naples and here he became acquainted with Celeste.  Incidentally both Alphonsus and Celeste were born in Naples merely weeks apart.

The Order of the Most Holy Redeemer (Redemptoristines) was officially founded on the Feast of Pentecost, 13th May 1731.  The vocation of the Redemptoristine Sisters was to be a ‘Viva Memoria’ a ‘living memory of Jesus’.

On the Feast of the Triumph of the Cross, 14th September, the Sisters received the dark red habit, the colour of love, which reminds the world of God’s deep and infinite love for all humankind.

About this time Sr. Celeste had another revelation which she shared with Alphonsus.  He was to form a parallel men’s institute to ‘Go and preach to every creature that the Kingdom of God has come upon you.’  This coincided with Alphonsus’ own inspired desire to form a group dedicated to preaching the love of God to the poor and most abandoned. This institute, the Redemptorists, was eventually founded in Scala in 1732.

When Msgr. Falcoia, now a bishop, wanted to alter the Rule and be the only spiritual director for the entire community, Celeste resisted out of obedience to her conscience.  She was forced to leave the monastery with her sisters on May 25, 1733.

She now went to Nocera near Salerno where, at the Bishop’s request, she reformed a convent where the nuns had become lax in their religious observance.

After five years, on 4th March 1738, having been called to Foggia near the Adriatic coast, she founded there the Convent of the Most Holy Saviour.

In Foggia she finally realized her dream of living the Rule the Lord had given her by establishing her own monastery of enclosed, contemplative nuns.

The spiritual journey of Maria Celeste was no bed of roses, though favoured as it was with many mystical experiences it was also characterized by obedience to conscience, by a constant search for the meaning of the Gospel, and simplicity of life.

Sr. Celeste was a strong woman, determined and energetic, of profound integrity and interior freedom, who always defended the rights of conscience

She was intelligent, with great intuition and understood the urgent needs of the society of her time. But Maria Celeste was above all a mystic who lived in deep communion and prayer with Christ.

One of the principle marks of the spirituality of Celeste is the ‘Viva Memoria,’ that is the call of each person to be in himself/herself a true and authentic living image of Christ.

Her’s is a spirituality of everyday life, lived in commun­ion with Christ, the Redeemer.  It should radiate and go forth from us, imparting a contemplative dimension to the reality of the life of every Christian.  Contemplation does not mean flight but rather commitment to finding the presence of the God of love in each event of every day.

Redemptoristines today are spread throughout the world, continuing to live the charism of Maria Celeste and trying to be credible living witnesses of his love.

The above five paragraphs are extracted from an article by Sr Gabrielle Fox O.Ss.R. in Reality, Summer 2016.

Address of the Redemptoristines in Ireland: