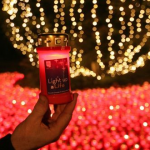 The Light Up A Life ceremony of remembrance at Our Lady’s Hospice, Harold’s Cross, Dublin. Photograph: Eric Luke.WhatsApp

Fr Pat Reynolds died in Our Lady’s Hospice, in Dublin’s Harold’s Cross on November 22nd. He was 78. Before moving to the hospice, he was a patient for six weeks in the Dublin hospital where I am chaplain.

My morning routine at the hospital begins with a newspaper delivery, handing out daily newspapers to patients.

My first encounter with Pat was on one such morning when he asked me if I had The Irish Times. He was in luck as I had one copy. We got chatting. Maybe during our chats in the next day or so I discovered he was a Redemptorist priest, or maybe it was a nurse or doctor who said it to me. During the following days and weeks we built up a friendship.

It is a grace-filled privilege to be a hospital chaplain. It affords one the possibility of seeing first-hand extraordinary acts of love and kindness every day. And it also allows you meet amazing people. And guess what, after 14 months in the job I’m inclined to think there are degrees of “amazement” in every human being.

I took a shine to Pat. We had great conversations, moments of fabulous laughter. Our degree of acquaintance reached such a level where I found I was able to talk to him about priesthood and explain many of my frustrations with the “priestly caste”.

Pat had that wonderful ability of listening to you. Every single time I spoke with him I felt he was genuinely interested in me. We shared our life-stories. He had been many years in the Philippines. He came home to Ireland at one stage and was appointed director of students. When he told me that, I was able to joke with him and tell him I had no time for clericalism. He smiled and told me that they had no-one else for the job and that his predecessor had left the congregation and priesthood to marry a woman.

On hearing of Pat’s death, a nurse asked me when the funeral was as she would like to go to it and another nurse was on the verge of tears. Some days earlier, on the day he left our hospital, I saw a nurse express such sadness that he was leaving us. She said: “What a dote of a man, I’m going to miss him”. Remember, these are nurses, who deal with sick and dying people and yet they had been “blown over” by the kindness of this man, who happened to be a priest.

I have no real difficulty saying it but I have major issues with the hierarchical church. I’m angry, bored, annoyed, saddened, enraged by the actions of some priests. I can’t take the pomposity, the arrogance, the “I know best” attitude that sits so easily with so many priests. And then the silent ones too, who hide behind anonymity. Maybe it has something to do with my DNA, but that’s simply the sort of person I am. I think I understand why the institutional church is where it is today. I refuse to blame secularism or some raging enemy who is out to get the church. Instead people are sick to their back teeth with how the institutional church has behaved, and indeed still behaves. It seems to me the institutional church simply does not get it. But fortunately there is far more to the church than its clergy.

During the weeks Pat Reynolds was in our hospital, I never once heard him talk about the evils of secularism, nor about transubstantiation, canon law, gay marriage, Catholic schools, never once.

And yet he was a priest who has left an indelible mark on me. I feel certain there was not a member of staff he did not inspire. Why? Because he showed his love for God through his humanity. No stuff and nonsense, no posturing, no game-playing.

In tomorrow’s first reading from the prophet Isaiah, God says: “Console my people, console them”.

And in the Gospel, the first words from St Mark speak about the Good News of Jesus Christ. Pat Reynolds consoled and brought good news to people.

He lived the Gospel and people saw that.